Is anything wrong sloganeering: “All accidents are preventable”?

October 14, 2018
#Safetitude: Is anything wrong sloganeering: “All accidents are preventable”?
Up till 20 years back in my early career, I used to say same to motivate others in my efforts to improve safety. After reading the book on Psychology of Safety by E. Scott Geller, my idea changed for the way that I believe now.
There’s no harm having this optimism and working for this perfectionism but making workers believe in actually, inhibit achieving a Total Safety Culture (TSC) for higher safety performance. Reason being, workers in the atmosphere may be reluctant to admit they were injured or had a near miss. They try to hide and suppress the facts when they met with an injury. The fear that they may be held guilty if they report getting injured and also causing loss of reward of NO INJURY, will dictate covering up the real causes (as shown in the pic) that might be worked upon to avoid re occurrence. This way, the feedback from workers seize to be surfaced for working on remedial measures which in turn would facilitate a situation that leads to poor safety performance.
Therefore, this is not a slogan to focus attention on rather Safety pros should address issues related with dynamic human behaviors (accident contributory factors mostly) and work consistently for reaching ultimately to a fewer accident situation. Strategy to overcome human behavior for high safety performance is a subject to further deep dive into the subject matter. 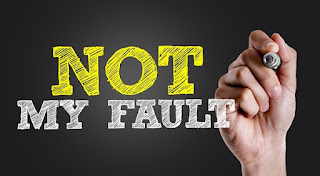 Popular posts from this blog

An appeal to CEOs

November 29, 2018
# safetitude A 2.19 mins video perhaps you may feel a value though. It's an appeal to CEOs who only have all the abilities to influence safety in their organization.
Read more

Similarity between profession of a Doctor and a Safety Officer

August 10, 2017
@safetitude: The profession of  a Doctor and a Safety Officer  is alike. Both professions require a through diagnosis of the  problem (cause of illness in a patient and safety issues in the organisation respectively) before arriving to a remedy. One can imagine the effect of a wrong prescription and a wrong safety program of improperly chosen medicine and Safety program. Therefore, success and failure of both professions lie across a very thin line.
Read more 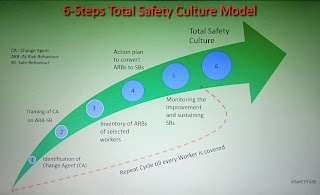 @safetitude: 6-Steps Total Safety Culture Model Further, an extension to 2 earlier posts that intended to enhance Safety performance and to build and establish a Total Safety Culture (TSC), this is one proprietary designed model as a guide to the journey. The strategy can be started with a small model with a selection of a change agent ( a worker with right safety attitude and zealous to take forward) and making him work through various stages of the model. Once one cycle is established, this can be repeated on the bigger scale until every worker in a business unit is covered. This also can be extended to higher management members in a later phase of implementation.
Read more

Safetitude Training And Consultancy
The objective of the Safetitude is to begin a campaign for developing right kind of safety attitude in human beings employed to create useful value, through training & awareness. Here, human’s behaviour is uniquely transformed from ARB (At-Risk-Behaviour) to SB (Safe Behaviour) by way of implementing D-O-I-T process across an organisation. This changed behaviour over period of time, brings about a change in the person’s attitude. Progressively this approach is being applied widely in an organisation as an effective business tool to bring an “actively caring” environment, ultimately to foster Total Safety Culture (TSC) in the organisation, in order to control human-caused-accidents thereby enhancing many things including bottom-line.